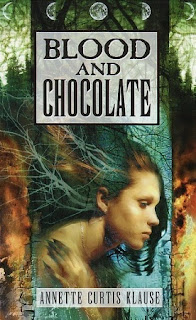 Vivian Gandillon relishes the change, the sweet, fierce ache that carries her from girl to wolf.  At sixteen, she is beautiful and strong, and all the young wolves are on her tail.  But Vivian still grieves for her dead father; her pack remains leaderless and in disarray, and she feels lost in the suburbs of Maryland.  She longs for a normal life.  But what is normal for a werewolf?
Then Vivian falls in love with a human, a meatboy.  Aiden is kind and gentle, a welcome relief from the squabbling pack.  He's fascinated by magic, and Vivian longs to reveal herself to him.  Surely he would understand her and delight in the wonder of her dual nature, not fear her as an ordinary human would.
Vivian's divided loyalties are strained further when a brutal murder threatens to expose the pack.  Moving between two worlds, she does not seem to belong in either.  What is she really- human or beast?  Which tastes sweeter - blood or chocolate?


I'm not sure what to think of this book.  I think if this had been my first werewolf book I would have loved it.  I think if this book had nothing to do with Aiden, and only been about the inner workings and the shambles of the broken wolf pack I would have loved it even more.  Instead this book was 50% about how Vivian really likes Aiden and how she wants to taste him, and 50% bad ass crazy werewolf stuff.

I had a really hard time liking Vivian. She was....kind of a bitch.  There!! I said it!
Aiden was UGH!  He turned into such a ..GRRRR  I just wanted to slap him.  I wish Vivian had.
I liked Gabriel, but it was definitely odd how he kind of went from being the creepy older man, to a good guy.  Didn't really see that one coming.

Anywho, I liked the last bit of the book the best.  Most entertaining.  This book was just okay for me.
Posted by Straylights at 7:51 PM

I think I have lost the interests in books now :( I am kinda sad, I have some Nora Roberts books staring at me saying "read me momma, read me you fool!"

It's okay, I would lose interest if I had to read Nora Roberts too. haha jk! Maybe you just need to try a different genre!! :)