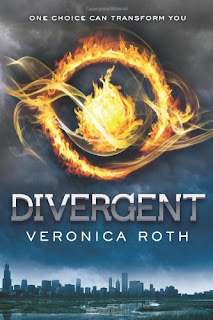 In Beatrice Prior's dystopian Chicago, society is divided into five factions, each dedicated to the cultivation of a particular virtue-Candor(the honest), Abnegation (the selfless), Dauntless (the brave), Amity (the peaceful), and Erudite (the intelligent).  On an appointed day of every year, all sixteen-year-olds must select the faction to which they will devote the rest of their lives.  For Beatrice, the decision is between staying with her family and being who she really is-she can't have both.  So she makes a choice that suprises everyone, including herself.


During the highly competitive initiation that follows, Beatrice renames herself Tris and struggles to determine who her friends really are-and where, exactly, a romance with a sometimes fascinating, sometimes infuriating boy fits into the life she's chosen.  But Tris also has a secret, one she's kept hidden from everyone because she's been warned t can mean death.  And as she discovers a growing conflict that threatens to unravel her seemingly perfect society, she also learns that her secret might help her save those she loves...or it might destroy her.


I'm sure you've heard of this book and all of it's awesomeness already.  But I have to say that while I enjoyed it, I didn't think it was as amazing as everyone said it was.  I think the hype ruined it for me.  Sure there were some good parts, but most of this book was Tris getting trained.  Nothing all that special really...
The ending was good, I'll give you that, and I definitely want to know what happens next.

This might sound a little weird, but a lot of the book reminded me of Ender's game.  The whole training thing, and how people started to not like her because she was so small, and yet so strong.  There was even a naked shower type scene!

I have a lot of questions though, like how can people be expected to only be one virtue?  You can only be intelligent but you can't be fearless?  How the hell would that even work??  Are they dumbed down humans and can only process one emotion?

Tris, to me, was not easy to relate to.  Her inner voice was stilted and kind of emotionless.  And Four was alright but I would really be annoyed if everytime I talked to someone they grabbed me under the chin and made me look at them.   I'd feel really demeaned and childlike...but that's just me.

Anyways, it was just an okay read for me.  I'm sure most of you would disagree with me though so go out and read it for yourselves!
Posted by Straylights at 1:29 PM

I'm sorry that you didn't enjoy this. I have to admit that I had my reservations when I started reading it, but was quickly caught up in the whole story and loved both Tris and Four's characters. Love your new layout by the way :)