Halfway to the Grave 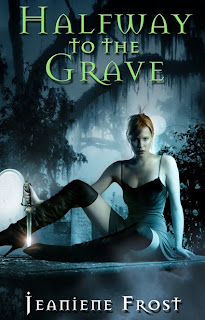 I have a not so secret, secret.  If you promise to tell everyone, then I will tell you.  Stand back, I'm going to shout it at you.  I FREAKIN' LOVED HALFWAY TO THE GRAVE!

Sure, the heroine was a blushing, prejudiced, unable to make up her mind about simple things, extremely annoying at times, sort of heroine but what I loved the most was that she learned, and knew her flaws.
Take this quote for example, I <3 it because she sums herself up so perfectly that I wanted to rejoice!  Hey, at least she knew how unbearable she was sometimes! So without further ado...


"I'm saying I'm a moody, insecure, narrow-minded, jealous, borderline-homicidal bitch, and I want you to promise me that you're okay with that, because it's who I am and you're what I need."

After she said this, I liked her a lot more.  Oh and Bones is probably my new favorite character even though he said "blimey" waaaayy to often.  And why were his eye brows were always in/nesting in his hairline? Did they lay eggs?  I didn't know that was actually possible.


The glowing green eyes for the vampires was an interesting concept.  However I had to chuckle every time it was described because I kept imagining Cyclops from X-men shooting green lasers out of his eyes instead of red.  In fact, I was so inspired by the image that I took the liberty of photoshopping a picture for you! 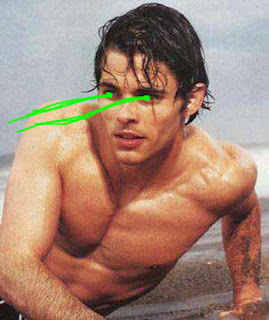 (pewpew!)
Hahahahha ok so photoshop isn't my forte' but you get the picture!
So finally, after months of searching, I've come across this gem. (although technically I've probably had this book since last year and its just been sitting on the bookshelf pleading with me to be read, but that's neither here nor there) A book I couldn't put down, couldn't stop thinking about when I wasn't reading it, and woke up at 5 am to finish.  Im in lust!  I can't say love just yet because, well, you know how some series go.  First book is amazing and the second is just eh.  So off to the book store I go!  Guess I'll be staying in the F author zone a little longer than I planned, but thats alright :D
Posted by Straylights at 2:10 PM