Slave to Sensation
By: Nalini Singh 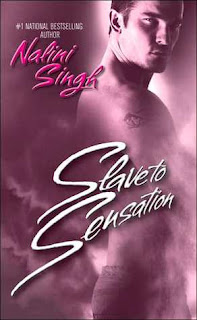 In a world that denies emotions, where the ruling Psy punish any sign of desire, Sascha Duncan must conceal the feelings that brand her as flawed.  To reveal them would be to sentence herself to the horror of "rehabilitation"-the complete psychic erasure of everything she ever was...
Both human and animal, Lucas Hunter is a changeling hungry for the very sensations the Psy disdain.  After centuries of uneasy coexistence, these two races are now on the verge of war over the brutal murders of several changeling women.  Lucas is determined to find the Psy killer who butchered his pack-mate, and Sascha is his ticket into their closely guarded society.  But he soon discovers that this ice cold Psy is very capable of passion-and that the animal in him is fascinated by her.  Caught between their conflicting worlds, Lucas and Sacha must remain bound to their identities-or sacrifice everything for a taste of darkest temptation.


Oooh, I loved this book!  Normally I don't love paranormal romances.  I just kind of say "meh" and shrug my shoulders and move on to the next book.  I really liked the idea of a Psy race, one that shows no emotions and does things based on logic....cold, calculating logic.  It was so evil sounding!  Like Terminators. Creepy.

The development of Sasha and Lucas' relationship was enjoyable to read about. I liked when Lucas took Sasha to his Pack's house and introduced her to some of his pack members and two children and how she responded to getting her shoe chewed on.   It was cute.   It was fun to read about Sasha's struggle to keep her emotions from showing, especially around Lucas.

As far as plot, I pretty much guessed who the Psy killer was right away but it still made for some interesting reading.  I'll definitely be reading the next in the series!
Posted by Straylights at 10:50 AM

I've heard some pretty fantastic things about Nalini Singh's series, so the fact that you're raving about it as well means that I'm definitely going to have to get around to the one book that I have sitting on my shelvf by her. The Psy race sound pretty interesting and different so would definiely give this one a go! :)