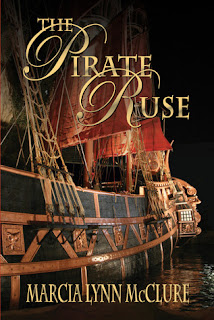 
An instant before the sea swallowed her, Cristabel Albay gasped her last breath.  She was certain it would truly be her last breath... Yet, mere moments later, her head broke the surface of the sea and she exhaled the breath she had been holding-the one that had not been her last-gasping for another.
"Do you swim, woman?" the pirate Navarrone growled.
"Y-yes," Cristabel stammered.  her thoughts were muddled-for panic was her only ally.  Yet, she was cognizant enough to know that her life was still in danger-not from pirates perhaps-but from the sea.
"Then swim!" the pirate growled.  "If you want to live to see another sunrise, then swim for The Merry Wench."
She glanced up to the Chichester where pirates and British sailors yet battled.  The Screaming Witch was already sailing, and Cristabel would rather have died then be the victim of the atrocities that would have met her aboard it.
Yet, to abandon one pirate ship for another  It was madness! Still, she could not fathom drowning-for drowning terrified her more than any other fate of death.  Her only hope in surviving was to do as the pirate ordered.  She had heard tales of The Blue Blade Navarrone-tales of mercy.  Perhaps he would take pity on her.  Thus with no other venue to follow, Cristabel began to swim-to swim for The Merry Wench and whatever fate awaited her there.


I guess when I started reading this book I didn't expect it to be so cheesy.  Cristabel would just annoy the crap out of me sometimes!
I enjoyed the first half of the book with Navarrone and Cristabel getting to know each other.  I loved their banter and the entire scene when Cristabel was drunk on whiskey.  It was hilarious!  But right around the middle of the book, for me, the pace just seemed to slow down.  It was especially torturous when the ship finally docked and the plot went NOWHERE.  I mean, there is this whole mystery as to why Cristabel was abducted and put onto a pirate ship in the first place, and Navarrone questions her about it initially when he brings her to his own ship, but she's got no idea either so it just kind of ends up as a stalemate.  Then for more than half the book McClure just develops the relationship between Cristabel and Navarrone.  Not that I'm complaining about that, I mean, I loved that part.  Loved them conversing, and learning to trust each other, and discovering their feelings for each other.  It just happened SO SLOWLY.  It was like I was reading through molasses. They just sat around and thought about their feelings for one another, but never acted on them.  Then finally we get some good kiss scenes.  Honestly I was hoping for the kiss scenes to lead into some hot monkey lovin' but alas it was not to be.

So, I liked it well enough, I just wish the plot moved a long a little faster and smoother.  If you're looking for some good squeaky clean pirate lovin' romance, this is the book for you!
Posted by Straylights at 12:11 PM

Ahhh...that lil part sounds interesting...I read a book once that have a ton of hot monkey love scenes, it was about a rugged hunter/Native American or something with a French woman...it was hot. I gotta say...maybe I should find that book...

Awww too bad its cheesy, I love pirates, I was hoping it would be better. thanks for the great review!