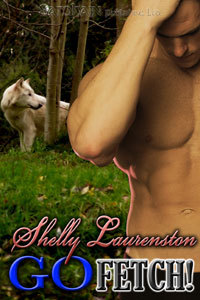 How much trouble can one small female be to a modern -day shapeshifting Viking? Well, it really depends on local gun laws.  Conall Vga-Feilan, direct descendent of Viking shifters, never thought he'd meet a female strong enough to be his mate.  He especially didn't think a short, viper-tongued human would ever fit the bill.  But Miki Kendrick isn't some average human.  With an IQ off the charts and a special skill withe weapons of all kinds, Miki brings the big blond pootch to his knees-and keeps him there.  Miki's way too smart to ever elieve in love and she knows a guy like Conall could only want one thing from her.  But with the Pack's enemies on her tail and a few days stuck alone with the one man who makes her absolutely wild, Miki is about to discover how persistent one Viking wolf can be.


I read the first book in this series back in December when it was free for Kindle for a bit.  Go Fetch tells Miki's story and OMG I just have to say that I LOVE Miki.  She is hilarious, fiesty, snarky, mean, and totally adorable.   I liked this second book much better than the first probably because Conall was a really great male love interest and he didn't constantly refer to Miki as a "sweet piece of ass."
So I read this book on the plane and was constantly giggling, Miki just says some of the most funny things, and some of the situations she got into were just too funny.
The overall threat of the packs enemies isn't all that present, but it was there, and mostly just gave Miki a chance to show off that she doesn't need a man to take care of her when danger strikes.  She's not the one fainting, she's the one shooting and I loved that.

Go Fetch was a quick steamy read, that I really enjoyed, also, I am pretty sure you don't need to read the first book to read this second one. It stands quite well on it's own.
Posted by Straylights at 1:09 PM

Ohhh and the cover *faints* I'd look at that all day :P