So in my last post I told you guys that I was going on a road trip with BFF for a book signing. Did I mention that it was for KIM HARRISON?????  I am a hugh HUGH fan of hers and The Hollows series is one of my absolute favorites.  I even buy the hardcovers when they come out, which I never do, so you can really tell that my love runs deep.  This was my first ever book signing so I was super pumped!

We left late Monday afternoonish and arrived in Lansing Michigan at about 9pm something or other.  I didn't take any pictures of the drive because 1. It got dark pretty fast.  2. I am a good driver and must always concentrate on the road (and we most certainly did not have spontaneous dance parties to Justin Bieber).   3. When we got to Michigan they hadn't bothered to plow the left lane  and even though in my own mind I thought the roads weren't that bad, others did and were only driving 50mph. I had to use my ninja driving skills and pass them on the left lane just so I could go a decent speed.
So we traveled over 400 miles from Wisconsin to Michigan and only had to stop once to get more windshield fluid.  wooo go us!

So anywho, Tuesday finally came and we went to scope out the store that would be hosting the event.  It was a really cute store with lots of books (obviously) but they also had records, cds, DVD's and used books!  Which was awesome. It also had two nice little sitting areas and a little cafe.  Really really cute.  So we were there pretty early and needed something to do to fill the time until we had to come back for the signing so, dorks that we are, bought a Glass Stone painting kit, an origami kit, and a friendship bracelet kit and the rest of the afternoon was spent in best friend bliss. 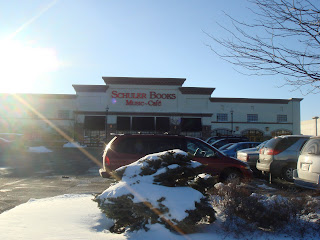 I pulled an A!ko and took a picture of my "gourmet" grilled cheese.... 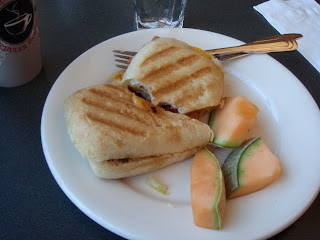 After eating we decided to go get some seats and eagerly await 7pm which let me tell you, is no easy task!! 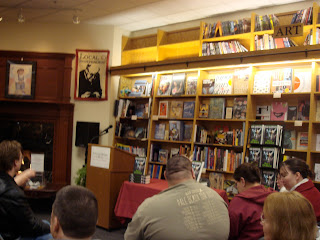 Finally it was time!  I was trying to be a good human being and not blind poor Kim Harrison with my extremely bright camera flash, so I kept trying to take pictures of her without a flash, and yeah, lets just say those pictures turned out like crap.  So she came out, read a small part from the book, answered some questions and then got down to the singing.  She got a pretty huge crowd for it being a Tuesday! 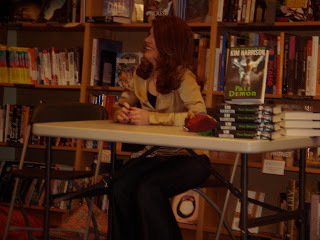 That picture is without a flash, one of the ONLY good ones I got. Actually, it's not even that good. See how grainy it is?


I only took this picture because the girl with the pink purse SKIPPED!  Booo! 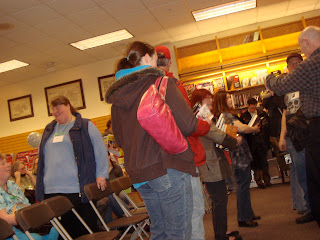 Finally it was my turn.  I went up and fan girled all over her. It was sort of embarrassing.  This is me telling her about how I got to read the book early and that Al is my favorite character and asking her if she could sign a specific page in the book that had to do with Al.  Do you see that look of "WTF" on her face?  HAHA! 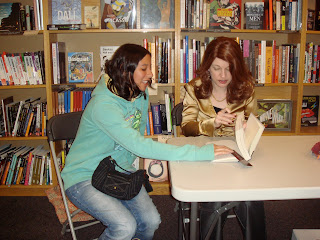 She handled my fangirling with grace and finesse, obligingly signed both the specific page I asked for and the front page and now I can die happy. 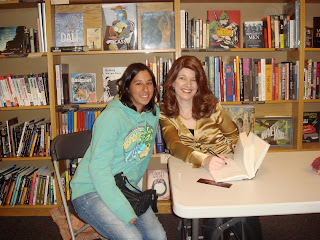 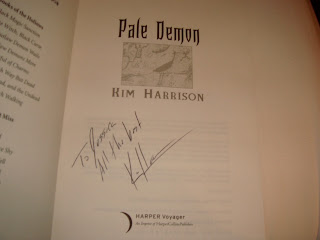 This  one is the specific page I asked for.  I was too lazy to rotate it so...ya know....just turn your head sideways  :) 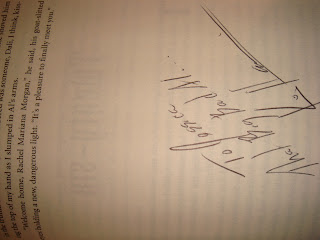 YAY!  My trip was sooo much fun!  But really I hope she comes a bit closer to WI next time because my butt was really sore from all the driving!  But in the end it was all worth it.
I wonder if Jim Butcher is going to have a book signing......hmmmm
Posted by Straylights at 1:48 PM

LOL yeah, see now you can tell people what you eat and you know what you ate that made you sick ;) I can tell you were pretty excited in the picture :D Driving ninja style you are now my hero! ^^, Sound like you had a wonderful time...and did you do any origami or friendship bracelet while waiting?

Sounds like a lot of fun. I was sad that Kim isn't coming to Portland this year. She always comes to Portland for her tours. I'm pretty sure she's used to the fangirl freak outs. I've done it a few times to her ;)(I begged her not to get rid of Pierce cause I love him!)

Gosh, sounds like you had loads of fun :)I really wish the could bring out more international authors to our shores, but we only get about 5-6 per year and then it's mostly adult fiction authors (which is not a bad thing - it's just that I'd love to meet YA fic authors too). Anyway, the venue looks absolutely fab and has a very cozy, inviting atmosphere about it that really makes for a perfect book signing event!