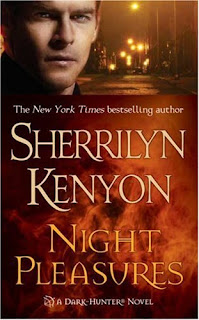 He is solitude. He is darkness.  He is the ruler of the night.  Yet Kyrian of Thrace has just woken up handcuffed to his worst nightmare: An accountant.  Worse, she's being hunted by one of the most lethal vampires out there.  And if Amanda Devereaux goes down, then he does too.  But it's not just their lives that are hanging in the balance.  Kyrian and Amanda are all that stands between humanity and oblivion.  Let's hope they win.

This was my first Sherrilyn Kenyon book and I have to say that for me it was just meh.  I like the overall story but I felt that sometimes the plot got bogged down every time Amanda described Kyrian's rippling pectorals, or every time Kyrian thought about how beautiful Amanda was and how he wanted to touch her.  OKAY.  I got it the first fifty times you said it.  I understand,  you guys are both too hot to handle and you have some major lusting going on.  Get to groping and get it over with!

Ahem, like I said, I did enjoy the story a bit more than the romance. And I liked Kyrian's back story and his tale of woe and the inclusion of some Greek history and such.


I really liked how Amanda came into her own powers but I would have liked to know that she actually had powers a tad earlier in the book instead of just towards the end, magically....oh I have my own powers! I can help defeat the bad guy!  How incredibly convenient  for all!  Yippie!

So yeah, I did like it, but it wasn't total love for me.   The constant descriptions of how delicious bodies looked and thoughts of running hands through hair just got to be a little too much for me.  Maybe once I get my TBR pile down to a reasonable size I'll go back and read the second book in the series to see if I enjoy it.
Posted by Straylights at 11:33 AM

Oh, I so get what you mean. One of my major pet peeves in fiction is heroines who can't stop their bucket loads of gushing about how hot their object of affection is. Especially when they're all in denial and act like they hate said object of lust. Still, I must admit to reading a Kenyon book or two and enjoying it.But yeah, I'm all for heroines toning it down on the "ooh, he's so hot, I'm going to faint" factor.