The Winter Rose
By: Jennifer Donnelly 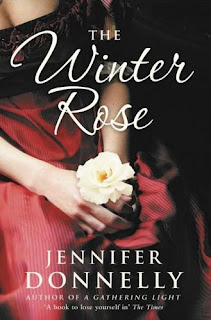 When India Selwyn Jones a young woman from a noble family, graduates from the London School of Medicine for Women in 1900, her professors advise her to set up her practice in London's esteemed Harley Street.  Driven and idealistic, India chooses to work in the city's East End instead, serving the desperately poor.  In these grim streets, india meets and saves the life of London's most notorious gangster, Sid Malone. A hard, wounded man, Malone is the opposite of India's aristocratic fiance, Freddie Lytton, a risings star in the House of Commons.  hough Malone represents all she despises, India finds herself unwillingly drawn ever closer to him, intrigued by his hidden, mysterious past.  ANd before long, even as they fight hard against their feelings, India and SId fall in love.  Theirs is an unpredictable, passionate, and bittersweet affair, and it causes destruction they could never have imagined.


How does she do it? No seriously.  Jennifer Donnelly never fails to impress me with her mastery of storytelling.  I mean wow, just wow.  I think the thing I love most about her is that she doesn't stick with any one genre and she always has a strong female protag.  Not some whiney, crazy, self centered, annoying, help me male I need you to save me girl.

Winter Rose is one of her earlier books, and is also the sequal to The Tea Rose, which I did not read.  You also don't need to read The Tea Rose to understand this story, which I liked.  Ok yeah The Winter Rose was long too, and towards the middle it started to drag a bit for me.  One thing I will say is that I wish a character had gotten more of what he deserved.  Man this guy was such a little shit!  lol!

India was awesome and Sid was amazing, and I loved this whole story.  Of course I realize that I haven't really said much about the book but here is all you need to know in five words or less:

Read anything by Jennifer Donnelly.

I promise you will not be disappointed.
Posted by Straylights at 5:46 PM

Hmm I need this..maybe it will bring back my love of reading...instead of shopping?

Ooh, I love the sound of this. Especially considering the fact that Sid is a gangster from the wrong side of town. I relish stories like those :) Going to have to add this to my TBR pile. :D