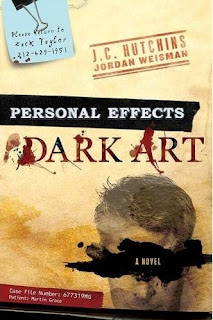 Personal Effects follows the extensive notes of therapist Zach Taylor’s investigation into the life and madness of Martin Grace, an accused serial killer who claims to have foreseen, but not caused, his victims’ deaths. Zach’s investigations start with interviews and art sessions, but then take him far from the hospital grounds—and often very far from the reality that we know.
The items among Grace’s personal effects are the keys to understanding his haunted past, and finding the terrifying truth Grace hoped to keep buried:
• Call the phone numbers: you’ll get a character’s voicemail.


• Google the characters and institutions in the text: you’ll find real websites


• Examine the art and other printed artifacts included inside the cover: if you pay attention, you’ll find more information than the characters themselves discover Personal Effects, the ultimate in voyeuristic storytelling, represents a revolutionary step forward in changing the way people interact with novels.
Bleh. I thought this book was going to be so awesome.  Inside the cover there is a pocket full of police reports, death certificates, driver license, creepy photos that have the eyes of people scribbled out and a bunch more stuff.  I thought since this was suppose to be an interactive book that I would be able to INTERACT with them.  Maybe use them to help solve a mystery of some sort.  Instead all I did was quickly glance at them and toss them aside.  Basically there is no point in all that crap being in there.  Sure it's cool that you can call the number on the cover and get Zach's voicemail, or check out the websites, but honestly what's the point?
And as far as the story goes it was mediocre at best.  Most of the time I found myself skimming through the pages, rolling my eyes at the stupid dialogue between Zach and his brother or Zach and his girl friend Rachel.  I mean come on!  They call each other "geek goddess" and "hottie artist" Gag! Boo! Hiss! Who does that?!  Nicknames are suppose to be short and sweet, not long and laughably stupid!
I wish Martin Grace had more screen time.  At least he was somewhat interesting with his self-imposed blindness. But no, he gets like...12 pages. Lame.
So while this book had a cool concept with all the extras you get to look at and explore, it all fell flat for me.   Yadda yadda yadda.  The end.
Posted by Straylights at 10:25 AM

Thank you for making the time to read my novel, and to share such a thoughtful review with your readers.