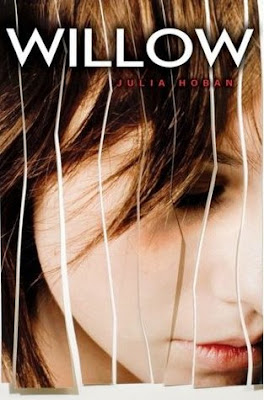 
Seven months ago, on a rainy March night, sixteen year- old Willow’s parents died in a horrible car accident. Willow was driving. Now her older brother barely speaks to her, her new classmates know her as the killer orphan girl, and Willow is blocking the pain by secretly cutting herself. But when one boy—one sensitive, soulful boy—discovers Willow’s secret, it sparks an intense relationship that turns the “safe” world Willow has created for herself upside down.
Told in an extraordinary fresh voice, Willow is an unforgettable novel about one girl’s struggle to cope with tragedy, and one boy’s refusal to give up on her.


WilloOOooOw  WilloOooOOOoOw!  Sorry I had to get that out.  Everytime I read her name that's how I said it in my head  lol!

But in all seriousness this book deals with some tough issues besides the cutting part of it.  In all honesty I don't really know how to review this book.  I liked it.  I liked Willow and her voice, but sometimes I really just wanted to shake her to make her see things in a different way.  For example Willow feels that her brother does not love her anymore because she thinks that he believes that it is her fault their parents died.  All these misunderstandings could have been solved if they would have just talked to each other!  Communication is KEY!
Luckily Willow finds Guy.  Let's just put it this way; Guy is amazing.  In fact, it sort of bothered me just how perfect he was.  So understanding, so willing to listen.....maybe I'm a bit jealous?  Yeah probably  :D  In Guy, Willow finds the communication she so desperately seeks, even if it means bringing down some of the walls she built up to keep her emotions out.  In Guy she also finds someone who accepts her for everything she is, cutting included. And no, I'm not saying that he thinks it's ok that she cuts, or even really understands it, but he does his best to find out exactly why she does it and does try to get her to stop.
Willow was a depressing, interesting, moving, story about a girl trying to accept what her life has become.  A sweet tale of love and loss that sometimes got annoying because Guy was so perfect and Willow just couldn't get it together to communicate with her brother.  HA!
This book might not be for everyone but you should definitely check it out!
But what you should really REALLY check out is my GIVEAWAY!  DO IT!  <3
Posted by Straylights at 10:12 AM

Is the guy's name really Guy? o_o Oh my gosh, it really is. Weird. xD

I LOL'ed when I first saw this pop up on my blog roll. xD WillooOOoooOooOw!

Ugh yes his name really is GUY. Hated that name. I was in a play one time and there was a character named Guy but the teacher made us say his name like "GHEE" so stupid haha.

Sounds a little depressing for me; nice cover though :)

Willow is a nice name and Guy? haha...he's not french is he?? sounds like an interesting book, I had a friend that cuts...once, now she have found her "Guy"...:) I am glad his name is not Guy tho..I need this book o_O

I have to admit that I've been sitting on the fence with this one for quite some time now, but you have just won me over with your gushing (or is it really ranting *grins*) about how perfect Guy is :)
Jokes aside though, I haven't read a this kind of book yet, so I definitely think I should at least give it a try. :) Loved reading your thoughts on it!