Once an Itchy Witch

Hehe just kidding, thats actually not the name of the book.  But a big virtual hug to whoever can tell me what book "itchy witch" is from  ;)


I actually read Once a Witch by Carolyn MacCullough

Tamsin Greene comes from a long line of witches, and she was supposed to be one of the most Talented among them. But Tamsin's magic never showed up. Now seventeen, Tamsin attends boarding school in Manhattan, far from her family. But when a handsome young professor mistakes her for her very Talented sister, Tamsin agrees to find a lost family heirloom for him. The search—and the stranger—will prove to be more sinister than they first appeared, ultimately sending Tamsin on a treasure hunt through time that will unlock the secret of her true identity, unearth the sins of her family, and unleash a power so vengeful that it could destroy them all. This is a spellbinding display of storytelling that will exhilarate, enthrall, and thoroughly enchant.


This is the book cover that I read from: 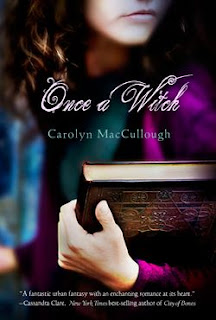 And this is the book cover I wish that I got to read from: 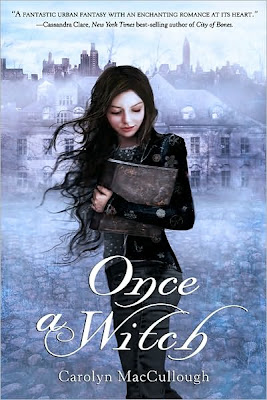 What's so great about half faces anyways?


Oh yeah this was a good book.  I really liked Tasmin even if every time I read her name I called her tasmanian devil.
I really didn't think I was going to like this book.  Especially when I got about 13 pages into and seriously considered reading my other library book.  Don't ask me why, I just wasn't really liking Tasmin.  Especially after she was talking about her flirting skills.  Maybe it's because there was a cat in the scene?  And then after reading about the cat, I pictured my cats in this little witch hat that BFF bought for them and I giggled for a bit and then continued reading.  I'm so glad I kept reading!

Anywho I think the summary above pretty much gets the gist of the plot so I won't really elaborate anymore.  Except to point out that Tasmin has a booooyfriend Tasmin has a booooyfriend.  And YAY no stupid love triangle weeee!  I totally like Gabriel, but I wish he had a tad more personality.  Like maybe   "_____"   that much more.  Here's hoping we get more Gabriel in the next book, which I most definitely will be reading.

Hmm I think the quality of my half ass reviews is getting worse HAHA!  But I have two things to blame:
1. Assassin's Creed Brotherhood
2. HARRY POTTER IS COMING OUT!

Hell yes I am jumping on train stop at 9 3/4!  Nine and three quarters. Don't ask me why my Harry Potter looks so evil.  I've got no idea.  OR maybe he's winking?  Yeah sure.  I think I need a Harry Potter marathon!  Books and movie!  It's been so long since I've read/seen either!
Itchy witch....
Posted by Straylights at 8:13 PM

You're so funny.
I'll have to pick this one up. And I seriously need to get me an Xbox, for reals. Ya' hear that Santa? X-B-O-X
And itchy witch, I've heard that somewhere. The Hollows series? Doesn't Jinks call Rachel that?

haha I totally understand what you mean about being totally distracted by Harry Potter coming out. I'm seeing it tomorrow at midnight, yay. Until then, there's now way I'm paying attention in class.

@ Crystal - You get half a virtual hug! It IS from the Hollows series! But not from Jenks :D

@ Lizzy - I'm so jealous that you are going at midnight! I think I'll wait till later in the week to go though because I hate crowds LOL Too bad movie theatres dont open up at 6am, No one would be there, and I could watch the movie without having to dump my soda on annoying teenagers who dont shut up

@ Carrie - I like that it's drawn, and I like her hair floating in the wind, IDK why :)

Hannah
Want to be featured?
http://abouteverything-hannah.blogspot.com/2010/11/featured-blogger-shortcut-for-signing.html

Both covers are cool, the second one reminds me of Harry Potter :P and I so want to watch that!!! ARRrghhhh....I need to call my movie buddy to watch it!!! My friends have watched it already!!! I wish I had started the book tho...now I am just too lazy :P

I have the sexy face hots for Al...who should do it with his "itchy witch". I'm sick, but so are you.

Kitty Hats make everything better in this world BTW.

AL! That was it! LoL And I agree Natalie.

Goat eyes are so hot.

Thanks for stopping by my blog this morning. I was gonna answer the "itchy witch" question, but looks like I'm just too slow. Have a great day!

I couldn't enjoy the book as much because the dudes name was Gabriel. Gabriel = current guy I'm pining for that has no idea I exist. Lame. Can't wait to read Always a Witch :D

*snorts* You are absolutely hysterical. Remind me to never drink anything when I'm sitting by my laptop and reading your reviews - I'm bound to spill it :) Ha, you also do realise that I will now probably also think of her as Tasmanian devil after reading your review? :)