HaHa that's not really what the title of the book was.  I had you going there for a second though didn't I??  But actually this book wasn't all that boring, cause, after all , I did finish it! Why did I read this?  Cause I got it for free on my phone, that's why!  I've heard this series being compared to J.R. Ward's Black Dagger Brotherhood series but I couldn't tell you anything about that as I have not read them yet.
I haven't been feeling the greatest in these past 24 hours so I've been laying around in bed reading this book off my phone.  (Thanks Stanza!)  Here's a summary about the book from Goodreads:

Kiss of Midnight
by:  Lara Adrian


He watches her from across the crowded dance club, a sensual black-haired stranger who stirs Gabrielle Maxwell’s deepest fantasies. But nothing about this night—or this man—is what it seems. For when Gabrielle witnesses a murder outside the club, reality shifts into something dark and deadly. In that shattering instant she is thrust into a realm she never knew existed—a realm where vampires stalk the shadows and a blood war is set to ignite.

Lucan Thorne despises the violence carried out by his lawless brethren. A vampire himself, Lucan is a Breed warrior, sworn to protect his kind—and the unwitting humans existing alongside them—from the mounting threat of the Rogues. Lucan cannot risk binding himself to a mortal woman, but when Gabrielle is targeted by his enemies, he has no choice but to bring her into the dark underworld he commands.

Here, in the arms of the Breed’s formidable leader, Gabrielle will confront an extraordinary destiny of danger, seduction, and the darkest pleasures of all. . . . 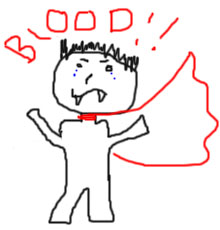 This blurb about the book is way more interesting than the book itself I'd have to say.  Most of this book was Lucan going back and forth on whether he wanted to be with Gabrielle.  He'd come to her in the night (like the creepy emo vampire that he is) have some sexy time with her, and then leave in the morning all brooding and swearing it would be the last time he saw her, only to return to her the next night.  For all intents and purposes Lucan was the girl in this relationship.  SO indecisive I nearly pulled all my hair out.
No really, this is pretty much all that happens in the book!  Back and forth, back and forth.
Yeah, there's a baddie but he makes all together about one and a half pages of the book.  Whoopie I am so scared......
I have heard that this series gets better and maaaaaayyyybe I'll try it out later.


*I know you are dying to know so I will just put this out there.  Yes.  I am available to draw portraits for you.


** No, I do not know why the vampire Lucian has no hands or feet in above picture.


***One more thing, Lucian did not wear a cape in the book, that is just artistic license taken by me.

Email ThisBlogThis!Share to TwitterShare to FacebookShare to Pinterest
Labels: A, Kiss of Midnight

give it another try - the series does get better - but I can't say it's equal to Ward - I did like it as it moved further and the story unfolds, waiting to see if the newest book keeps me. The twist on the origin of vamps is interesting, is it not? LOL i always say, if you can think past that you will enjoy the series, but it works for the series. anyway. new follower!

I'm impressed that you can read a book on your phone, lol. I've resisted getting an e-reader because I don't think I'd like reading on a screen, can't imagine what its like to read on a phone :)

LOL. And here I wanted to read this book series. I'm suddenly thinking twice now. Your review is very, very funny though :)

Shiori @ Panic in the Lingerie said...

The cover is pretty bland, I think I'd prefer your illustration on the front lol! XD