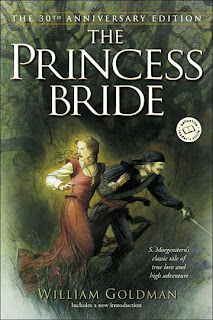 The Princess Bride
by: William Goldman

What happens when the most beautiful girl in the world marries the handsomest prince of all time and he turns out to be...well...a lot less than the man of her dreams?

As a boy, William Goldman claims, he loved to hear his father read the S. Morgenstern classic, The Princess Bride. But as a grown-up he discovered that the boring parts were left out of good old Dad's recitation, and only the "good parts" reached his ears.

In short, it's about everything. 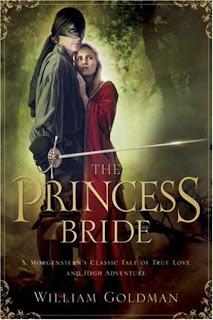 Dude.  I loved this book.  This book goes up on my favorite books of all time shelf.  And yeah, I'm sure that you can tell from my previous posts about books that it takes a lot to make it up there.  What I really love about this book is that it is a stand alone.  You don't see many of those these days, especially when you get into the fantasy genre.  Add to that, the fact that this book was written in the 70's and you've got something special on your hands.  This book really does have everything, romance, sword fighting, giants, death, revenge, miracles, and true love.

Ok and yes, I admit it, Goldman really had me thinking that there was an actual S. Morgenstern and that he really was telling the abridged version of the tale.  Through out the book Goldman interrupts/inputs mini stories about things that he skipped in his abridged version including princess training for Buttercup, wedding preparations etc. Actually before the story even begins there is 36 pages of Goldman describing how he came to write the "abridged" version and all his legal troubles involved with it. It was cute and funny, but at the same time, I could have done without the interruptions I was so engrossed in the story that I just wanted to read!  It's fascinating at the same time because really this story is two stories in one. Goldmans fake life and then him telling the abridged Princess Bride.  Madness I tell you!

Now, I had seen the movie years ago so unfortunately when I was reading the book I pictured the movie characters in my head as I was reading.  I was even doing the accents lol.
Basically I loved everything about this book.  I loved the background information on the characters and the humor and well, I know I said it already but....everything!  Actually I didn't really like Buttercup.  Goldman makes her seem extremely cruel at times and stupid as well. 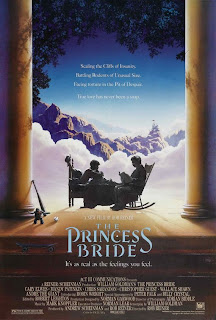 Aaaannd since I watched the movie yesterday I can tell you that I still enjoyed it.  Some scenes were even taken word for word from the book, which I loved.  Of course, Goldman did write the screenplay for the movie so that's probably why it wasn't completely butchered.
The movie starts with a grandfather reading the book to his sick grandson and similar to the book there are some interruptions while the action is going on.  Like the child telling his grandfather that he read part of the book wrong.  It's cute yes, but annoying because they always did this at the good parts!

Anyways I seem to have blabbered on and not really said anything so I shall tell you this...

Read the book!  It will be good for your health! 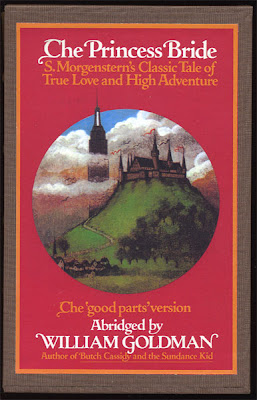 Now you make me want to search high and low for this damn freakin book :P...I have to say it is pretty intriguing...or I might just look for the movie first, it end faster XD

It will be good for my health right?? Reading the book...I know...

The Princess Bride is one of my all time favorite books as well. Great pick, fabulous review. =)

It has everything, that means I must read it! =P If I can't find the book, I'll def. try to look into the movie. :3

@ a!ko you SHOULD search high and low for the book! Besides the awesome story inside, the cover is so preetttyyyy *starry eyes*

@cutie I'm just sad that it took me so long to read this masterpiece!

@ Kristina- don't worry! I am almost 26 and I have also been wanting to read this book for a while as well. Thankfully it will still be amazing whenever you get around to it lol!

Well now definitely going to go...I am gonna make note, to get it no matter what!!!! :D Yeah it does have pretty cover *hypnotized* Thanks for the review :D

this is one of my all time favorite books! I have read it and reread it so many times. I am glad you loved it too!

@ Straylights - I know what you mean. But better late than never!

I loved this too. And he had me fooled!

Wasn't so fond of the film though