Thief With No Shadow

Yesterday I started reading Thief With No Shadow by Emily Gee.  I've had this book sitting on my shelf for I don't know how long!  I swear when I pulled the book off the shelf I heard it give a squeal of joy. 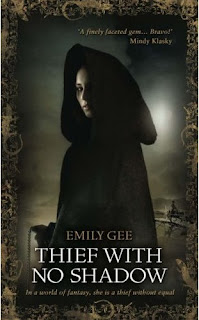 Aided by the magic which courses through her veins, Melke is able to walk unseen by mortal eyes.  When a necklace she has stolen holds the key to both saving her brother's life and breaking a terrible curse, she must steal it back from the den of fire-breathing salamanders.  Things are about to get very tough for Melke, especially when she comes to realise she may have to trust the very people who were out to kill her.

Ok so I admit, I look on goodreads and amazon and I read all the negative reviews about books. Don't ask me why I just do.  Anyways there were numerous reviews that were not so favorable to this book and I really thought I wouldn't like it.  So I started reading the book and really really thought I wasn't going to like it.  I mean, within the first 3 chapters the characters shivered like 10 times.  She shivered, he shivered, everybody effing shivered!!  But I kept reading!  I liked the character Melke.

Melke stole a necklace to save her brother from the oddly scary fire breathing salamanders  (haha can you imagine a fire breathing salamander?  I'm giggling just thinking about it).  Here's the kicker, the guy (Bastian) she stole the necklace from is also under a curse and he needs the necklace back to save his family.   Bastian is furious that Melke stole the necklace from him and he's got nothing but blind hatred for her now. He makes Melke a deal, he will take Melke and her brother back to his house so that Bastian's sister can heal Melke's brother, and in return Melke must steal the necklace back from the salamanders den.  Hmm did that make sense?

Most of the book takes place at Bastian's house.  His sister is a healer and spends most of her time healing Melke's brother.  Yeah.  That's pretty much all that happens.  Bastian thinks about how much he hates Melke.  Melke gets to know Bastian's sister.  Bastian is mean to Melke.  Brother gets better. Wow.  It goes on like this for more than half of the book.  And yet I was strangly interested.  I enjoyed getting to know the back stories of the characters.  I enjoyed watching Bastian and Melke try to deal with each other and their acceptance of each other.
Then something exciting happens!  Things get more urgent.  I can't give you all the details (unless you really want me to!) because it would spoil the story but let's just say that I was kind of surprised that if one of the characters had made a different choice early on( i.e. before Melke stole the necklace), none of the events that happened would have ever needed to take place.  I mean, it was kind of a slap in the face to the character who was stupid enough not to realize what he or she could have done in the first place.
But alas he/she was stupid.

Back to the bad reviews...I can see where they would come from.  Lots of thoughts are repeated in the heads of the characters, slow moving story, Bastian kind of gets tiresome with his hate rants, and after the big climax of the story it sort of goes right back to where we started.  Slow moving and lots of thoughts from characters.  But dammit I liked it! This just goes to show that I shouldn't believe all the negative reviews....but it's not going to stop me from reading them!  hehe!

I need drawing lessons...
And hello to all my new followers!
Posted by Straylights at 11:03 PM

LOVE the fire breathing salamander!! haha That's great! I sometimes hate to look at reviews because I don't want to be influenced when I pick up a book to read it. I also don't like to have anything given away to me in the plot, so when I do read reviews before hand, I kind of loosely skim them just to see what people are saying. I'm glad you enjoyed the book though! I also wondered if you were up to a game of "Tag"? I have tagged you on my blog if you are interested. No pressure if you aren't! Have a great day!

Good for you, wanting to form your own opinions...I know it's hard not to give up on a book when you read alot of negative reviews, but you really never know about a book until you try it yourself, right?