Waiting on Wednesday is hosted by Breaking the Spine to share what books we are most looking forward to. 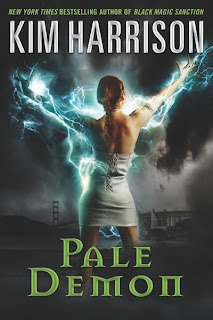 Condemned to death for black magic and shunned, Rachel Morgan has three days to somehow get to the annual witches convention in San Francisco and clear her name. If she fails, the only way she can escape death is to live in the demonic ever after . . . for ever after.

Banned from the flight lists, Rachel teams up with elven tycoon Trent Kalamack, headed for the West Coast for her own mysterious business. But Rachel isn’t the only passanger along for the ride. Can a witch, an elf, a living vampire, and a pixy in one car survive for over 2,300 miles? And that’s not counting the assassin on their tail.

A fearsome demon walks the sunlight, freed after centuries of torment to slay the innocent and devour souls. But his ultimate prey is Rachel Morgan. While the powerful witch with nerves of steel will do whatever it takes to stay alive, even embracing her own demonic nature may not be enough to save her.


I LOVE this series.  I discovered Kim Harrison's books while I was commuting to college.  Instead of doing homework, I read about Rachel Morgan.  I hate hate hate that they went to hardcover but I am such an extreme fangirl of this series that I buy them anyways.  It is the only series I buy in hardcover. Even my beloved Dresden files must wait a whole friggin' year for the paperbacks to come out before I purchase them ( and don't even get me started on the new covers, or the fact that the new books coming out in paperback are half and inch taller then the previous paperbacks  GRR!!!!!!!!)


A lot of people gripe about how Rachel hasn't grown in any of the books and that she still makes all the same mistakes but I don't care.  As long as I get my yearly dose of Jenks and Algaliarept I'm happy  :)


This is the tenth book in the series and these are definitely not stand alones.  I highly recommend starting at the beginning, plus, then you have something to keep you busy until February!


The book order is as follows:  Dead Witch Walking, The Good, the Bad, and the Undead, Every Which Way but Dead, A Fistful of Charms, For a Few Demons More, The Outlaw Demon Wails, White Witch, Black Curse, and Black Magic Sanction.  Phew!
Posted by Straylights at 12:53 AM

Oh I love this series!! I agree with you I have paperbacks and then BAM hardcover. I can't wait until this book comes out and I'm hoping for at least a little Trent and I'll be happy. February can't come fast enough :)

Here's my WOW for the week

New follower here!
Mmmm, that sounds like an awesome book, what a pretty cover!Thanks for spotlighting it. My WoW is in the link below... :)

Hope you have a great day!

Hi! I'm a new follower! Can I just say...that is and AMAZING cover! I would walk right up and put that book in my basket! definitely going into my TBR! Thanks for sharing!
The Delusional Diaries

Yay, WoW is a favorite of yours...LOVE that! Glad to have you participating!!

Hey guys! Thanks for all your great comments! I should probably mention that this is the 10th book in the series so if you do decide to read it, definitely start with the first ones!

Hmm, this kind of sounds like a female version of Dresden to me... and I do love me some Dresden XD

Check out mine here:
http://littlesqueed.blogspot.com/2010/09/waiting-on-wednesday_15.html

Sounds like a great series, I need to check it out! =)

Sounds like I'm going to have to go all the way to the beginning then - yay, more book series to read for me then. *grins*

I have the entire series in Hardback from the beginning as did not know any better, now that not much choice wait till get them cheapest price I can!

I haven't read this series but a lot of people like it.

Oh hell yeah, I can't wait to read this book as well. I hope you get your book and that you enjoy it. Check out what I am Waiting on Wednesday for.

Thanks for checking out my WoW!

I've never heard of this one before, but it sounds great!

Thanks for dropping by! I know what you mean about the ever-expanding tbr list...

I've had this series recommended by a few people now, I think I might have to move it up the TBR pile.