Oh it's Monday again... Hurrah!  Unfortunately I was busy so I was unable to watch much football  :(  I did however keep track of scores on my phone.  Ok so Steelers go to 3-0 after defeating Tampa Bay woot!

"Here's lookin' at you kid" 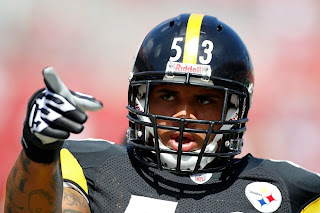 I do have some bad news to report.  Vikings beat the Lions ( damn!)  I suppose I would be more disappointed except that the Lions are, by all accounts the worst team in the league.  I mean, I'm pretty sure they haven't won a game since last November.  So good job Vikings!  You finally won a game!  But don't that win go to your head because you still suck  :D


The Packers play tonight on Monday Night Football so I'm excited for that eeeeee!

Moving on.....I gave up on American Gods.   That's right GAVE UP!   Maybe I'll go back to it if I ever study up on Norse Gods and Odin.  This of course means that I will never study up and I will never go back to the book.
So, I read Coraline.  And yes, I actually did finish it. haha. 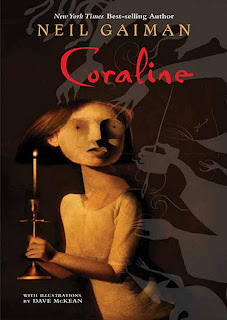 Has anyone seen the movie?  It's actually quite close to the book except the movie added the character Wybie --> Bleh!

Coraline is an adventurer! Well, she sort of has to be.  Even though her parents both work from home, they don't have a lot of time for  her.  So Coraline is usually left up to her own devices.  Counting doors, windows and visiting the odd neighbors.  Then, Coraline finds a small door that use to open up to a brick wall but now leads down a dark tunnel.  As she makes her way through, she discovers she's back in her own house...only not.  Coraline's mother, or should we say, other mother (she's got strange button eyes, is taller, thinner, and her fingers are too long) is there telling her she's been waiting for Coraline and that she never wants to let Coraline go.  And so begins an adventure for Coraline thats going to take all her wits and courage if she wants to save herself and return to her ordinary life.

Coraline is suppose to be a children's book, but it kept my interest throughout the story.  It's an adventure/horror story I guess.  Gaimen does a great job of describing things just enough for you to get a good picture in your head of what he's describing without being too overbearing.  After you read this story you might think that button eyes are a bad thing...but my cat Onyx doesn't seem to mind them!
See how happy he is? 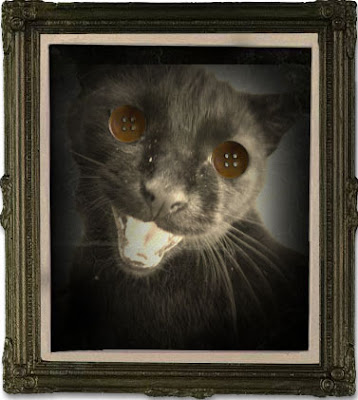 Coraline was an enjoyable enough book.  I mean, I liked it...or maybe it's because it was so short?  Anyways if you've got time to spare you should definitely check it out...or if you're lazy, watch the movie!
If you want a picture of yourself with your very own button eyes check out the movie's website HERE.  Lots of fun!
Posted by Straylights at 12:01 PM

Ok, forgive me if you've already joined this... but I'm having a Coraline giveaway (just in case you'd missed it!) Where I'm giving away a copy of the book AND a 6 inch adorable Coraline Doll!

Thanks Heather! I haven't joined but I'm going to right now! yay!