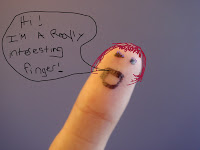 The conclusion is this: I pretty much despise reading Neil Gaiman books. (Unless it's his Sandman comic books) I've read Neverwhere, Stardust, Coraline, Good Omens (which I'm not sure if I should count because it was written with Terry Pratchet), and I quit reading American Gods.  All of these books, minus Coraline were so boring.  Gaimans' characters are all cardboard cut outs of each other.  I just finished reading Stardust and I can't even remember any of the characters names.  My left finger has more personality than these poor excuses for characters!  OH and I hate how all his characters just take everything in stride.

" What? My wife just died and you want me to work for you Mr. Wednesday?  Okay!"
Or
" Gee for some reason I know all the paths through Faerie even though I've never been here before"
How about this one?
"Yeah this old lady is trying to take my heart out while I'm still alive so that she can become young again. I think I'll give her a kiss on the cheek."
Come on Gaiman!  Give your characters some emotions! People don't react like this!

So, let's talk about Stardust: 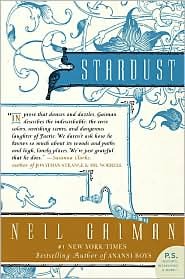 Young Tristran Thorn will do anything to win the cold heart of beautiful Victoria- even fetch her the star they watch fall from the night sky.  But to do so, he must enter the unexplored lands on the other side of the ancient wall that gives their tiny village its name.  Beyond that old stone wall, Tristran learns, lies Faerie- where nothing, not even a fallen star , is what he imagined.

Stardust was a short enough book. (Thankfully!)  But like I said, all Gaimens' characters are just sort of there, having stuff happen to them.  I liked some of the story lines of the book, and think they could have been better than what they were.  Actually, now that I think about it, Stardust could totally have been a short story fairy tale like..... Hansel and Gretle!

Bleh!  Sorry Gaimen but I think you should stick to the comic books!

Here's something I never thought I would say.  I liked Stardust the movie a million times more than I liked the book.

The END
Posted by Straylights at 10:24 AM

This review cracked me up, and was exciting. I don't think I've ever read a review against Gaiman before!

Now, admittedly, I'm quite the fan, LOVE Coraline, Wolves in the Walls, American Gods, Neverwhere, all of Sandman, The Graveyard Book, M is for Magic, and so on and so on... (although I did NOT like the Anansi Boys)... but I can absolutely see where you're coming from, and why you feel the way you do about the books. (Although I'm glad Coraline didn't make the list of dislike... I really think that might be some of his best work... and it's just SOOO creepy)

I have to ask though... did you dislike Good Omens, or did you find that one "ok"? and have you read any Terry Pratchett?

Hi Heather :)
I read Good Omens a few years ago but I'm pretty sure at the time I enjoyed it. I haven't read any Terry Pratchett although I always see his books at the book store, but he has so many I never know which one to pick up! Any suggestions??

I haven't read many bad reviews of Gaimen either....I feel like I'm breaking a law or something! lol but I'm glad you aren't too angry with me for my review hehe. Me and Gaimen just don't mesh well together I guess :)

Oh my gosh, I loved the Stardust movie, but I really didn't like the book either!
I haven't read any of Gaiman's books, but it's mostly because he just doesn't write the kind of books I usually read. He writes more YA books, and I'm more into literary fiction.
I'm going to second the Terry Pratchett recommendation. My favorite is The Theif of Time.

Oh no this is on my wishlist because I love the film....