Waiting on Wednesday is hosted by Jill over at Breaking the Spine to share what books we are most looking forward to. 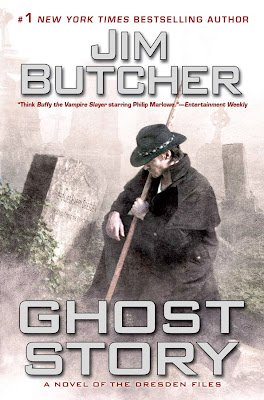 
When we last left the mighty wizard detective Harry Dresden, he wasn’t doing well. In fact, he had been murdered by an unknown assassin. But being dead doesn’t stop him when his friends are in danger. Except now he has nobody, and no magic to help him. And there are also several dark spirits roaming the Chicago shadows who owe Harry some payback of their own.

To save his friends—and his own soul—Harry will have to pull off the ultimate trick without any magic...


This is the 13th book in the series.


Yes Yes YES!!!!  Oh man, Jim Butcher never fails to bring on a good story.  NEVER.  Don't you just love the cover?  I know I do.  You probably can't see it, but if you click the picture you'll notice that the tombstone has Harry Dresden's name on it. Creepy? Hell yes!
Harry Dresden is definitely one of my most favorite book characters.  He's witty, sarcastic, smart, loyal, and well, as far as I'm concerned, Hot as Hell!

Just a few things I'd like to mention...My first gripe...is to the artist of the cover art.  What's with the hat?  Seriously, Dresden does not wear a hat!  Stop it with the hat thing on every cover!!
Also, this newest cover is a slight improvement, but can't Dresden do something else besides carrying his stick and wearing that dumb hat?
My second gripe goes out to ROC Fantasy publishing. 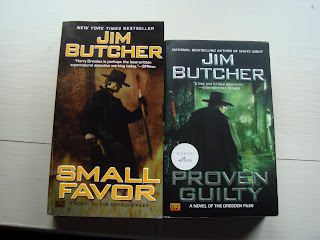 Who's stupid ass idea was it to make the newest paperbacks half and inch taller?  WTF  Do you know how stupid this looks next to all my normal sized books?  Not to mention they feel flimsy as hell. 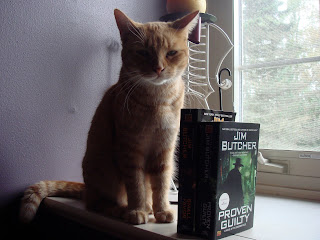 My cat does not approve...

I think I have one of his books on my bookshelf but I haven't read it yet. I remember there being a TV series that I liked that I think was based on the books. I really need to look closer into this series. Thanks for sharing

Come see what my WOW is this week

Have not read any of this series, but I can tell you are a big fan. Thanks for sharing your WoW!

Our pick is at BookSake.

Hahah yeah some of the mass-market books these days are strange. I really want to read this series! Hope you manage to get an advance of the new one! My WOW is at The Crowded Leaf.

Great pick! And i love your cat :)

i hadn't heard of these books before, thanks for sharing. i love the pic of your cat :)

First of all, your cat is absolutely adorable!! One of my cats is also orange - although substantially larger than yours, hehe - believe me, he makes Garfield look good :D

Secondly, OMG, it makes me so mad when books start coming out in different sizes ... *grrr* ... I mean, at least at the bookstore you can guesstimate if it's larger than the ones you have already, but when you buy online there's no way to know what the heck you'll end up with :o

Third, I really really want to start reading this series :)

Great pick. I've been meaning to start (yes, I said start) this series for a while now. I should probably get on that so I can be anticipating this release too!

Check out my WoW at Touch the Night

Thanks for stopping by my blog today! :)

I have never heard of this series or of Jim Butcher but . . . holy cow, these sound good! You are tempting me to add yet more books to my already massive TBR list.

Great pick! I love The Dresden Files, but I'm really behind on the books :)

I can't wait for Ghost Story... I mean Jim left us on such an ending! This waiting is so hard! I've love a ARC of it, but I doubt that prayer will be answered!