After reading Crank I was ready to get back on my quest of going alphabetically through my bookshelf.  My next author was Yasmine Galenorn and I was pretty excited to start reading Witchling.  I mean, the cover was pretty awesome, how bad could it be?  Uhhh...HORRIBLE?  This book was awful! So awful, I only made it to page 33.  Now some of you might be thinking, "oh you should have given it a chance and at least read to page 50 or 100."  No. Hell. No.  How about an example of how much of a train wreck this book is?

The narrator Camille, who is half witch half human is talking about how unreliable her magic/spells are; 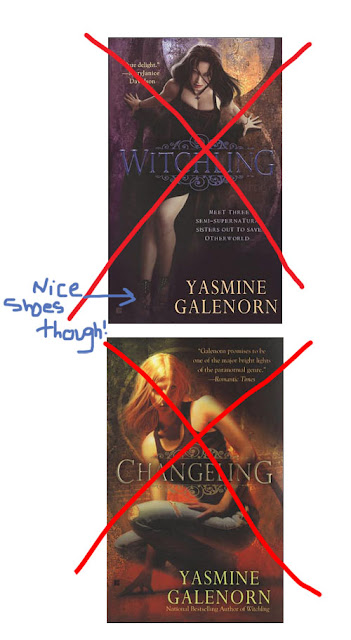 "Like last month when I tried to turn invisible to avoid being seen by an annoying customer. Things went haywire, and I ended up nekkid.  Not just naked, but leave-nothing-to-the-imagination nekkid."
Why is a grown woman spelling naked that way?  It's cute maybe... once in passing conversation, but not twice within two sentences!  It's especially not cute when you spell naked the correct way and then the stupid way all in the same sentence. WTF.
Oh maybe I should tell you what this book was about hey?
From Goodreads:
We're the D'Artigo Sisters: Half-human, half-Faerie, we're savvy - and sexy - operatives for the Otherworld Intelligence Agency. But our mixed-blood heritage short-circuits our talents at all the wrong times. My sister Delilah shapeshifts into a tabby cat whenever she's stressed. Menolly's a vampire who's still trying to get the hang of being undead. And me? I'm Camille - a wicked-good witch. Except my magic is as unpredictable as the weather, which my enemies are about to find out the hard way...

At the Wayfarer Inn, a portal to Otherworld and the local hangout for humans and beasties alike, our fellow operative Jocko's been murdered. Every clue points to Shadow Wing, the soul-munching, bad-ass leader of the Subterranean Realms. He's made it clear that he aims to raze humankind to the ground, turning both Earth and Otherworld into his private playground. Our assignment: keep Shadow Wing and his minions from creeping into Earth via the Wayfarer. The demons figure they're in like Flynn. After all, with only my 'bumbling' sisters and me standing in the way, how can they miss? But we've got a secret for them: faulty wiring or not, nobody kicks ass like the D'Artigo girls
See what I did there?  See how I was all like, "ughh this book is horrible!" and then was like, "So what's this book all about?"  That's exactly what the author did in this book!  Except she did it way less smoothly then I did.  I'm an expert at clunky paragraph changes   :D
:::Sigh::: The writing in the book was boring and horrible and blaaahhhhhh.  I regret buying the second book in the series which is why it has a big red X on its cover of my awesomely photoshopped picture of the two covers.
My recommendation?  Don't read these books.  Read Laurell K Hamilton's Anita Blake series, then STOP at the ninth book Obsidian Butterfly, cause they suck after that, trust me.
Hmm this is a really negative post.  I think I need to go to bed.
Posted by Straylights at 1:24 AM

You totally crack me up... and THANK you for the bad review... I always see "OMG AWESOME" and have to wonder... do people just not post the bad ones?!

And... AMEN to your Anita Blake statement. I've never seen an author destroy a series quite the way Laurell K. Hamilton did.

Novels On The Run said...

LOL!!! 'Nekkid'!!! BOL!!! Nice to see you are honest about your reviews and produce evidence. Is there a site that tells you how many of these not worthy of $$$ books actually sell? I always wonder about that..hmmm..

Your post cracked me up!! LOL. But, Aww. I'm bummed. I have the first one of this series in my TBR.
I'll be honest here, I tried reading Anita Blake. Couldn't get 20 pages in before I had to put it down, and then give it away.

@ Angela You never know! maybe I just didnt have the patience to read till it got good?? and Anita Blake isn't for everyone haha

Early Anita Blake was like my crack, if I indeed had a drug habbit...once she started with numerous sexual partners and crazy, magical, lusty sex-fests...I gave up...FIGHT CRIME, SOLVE MURDERS...it's what Anita was created for! GEEZ!