I'm not sure how to start this review.  The Spider's Bride by Debbie Gallagher is one crazy, confusing ride. Here's the premise from the back of the book: 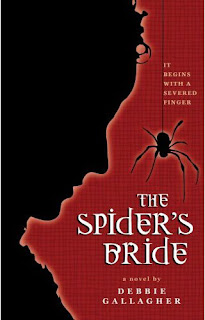 Not realizing she is being courted by a faery suitor, The Bride enters the cold and sparkling world of the Prince of Spiders.  She takes his gift of a severed finger, unaware that such gifts carry consequences - and finds herself trapped.
Until now, the Prince has delayed his preordained death by offering the blood of artists and poets to the ancient spirits of the land.  But with the coming of The Bride, he as a more daring plan in his heart...


When I started reading this book I was so confused.  You literally get thrown into this crazy world without so much as a warning.  This is not your ordinary faery story.  The faeries are not nice, they are scary and a tad insane. And don't let the word faerie fool you into thinking they are these beautiful creatures with wings and pointy ears and beautiful hair because they're not! Ok well, some of them are, but the majority aren't!!   The Prince of Spiders? Yeah he's an actual spider, who talks...which is creepy as hell if you think about it. There's also talking grasshoppers, living dolls, moths, human servants who run and bark like dogs and lots of other disturbing characters.  If you haven't read any stores about faeries and their rules you should brush up on them because they are in this story in a big way and the book gives little to no background information about them. 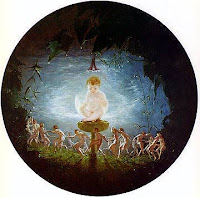 The book is told from several points of view and one of the most confusing narratives comes from the character named Richard Dadd. Here is some information I wish I would have had before reading this book.  It kind of helped clear things up for me to get a grip on the story better.  The character Richard is actually based on real life artist Richard Dadd who lived from 1817-1886.  In real life Richard excelled at "fairy paintings."

The painting on the right is called Puck and was one of his three major fairy paintings done in 1841. (click on the picture to see it bigger)


In 1842 Dadd painted "Come Unto These Yellow Sands" 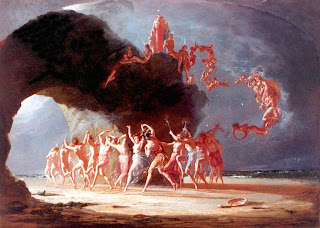 This site explains the painting in more detail.  "Come Unto These Yellow Sands" is mentioned a lot in the book a long with another painting called Crazy Jane.

Anyways, what Dadd best known for is going crazy and killing his father and then getting sent to the loony bin where he continued painting.
So in the book we get a look at crazy Richard's point of view.  This Richard though, has pretty much been crazy his whole life and we get a glimpse into his chaotic point of view.  Although the book is pretty chaotic in itself.  *shrugs*

Here is one thing that really bothered me for some reason.  I could not figure out the size of characters.  Were they the size of insects?  Human size? Rodent size?  Doll size?  ( the word size looks really weird to me now haha)

Did I like this book?  At first, no. At first all I thought was WTF IS GOING ON?!?!?!?  Then I got into the story a little more and read up on Dadd and understood it a teensy bit more and liked all the odd characters especially the Hunter. Then suddenly I had finished the book.  Now I'm rereading it.  It's most definitely a reread "to catch what you missed and understand it better" type of book so.... I think I liked it? lol

This book is most certainly not for everyone, but it couldn't hurt to try it out!

oh and if you're scared of spiders.....don't look any further down!!  Don't say I didn't warn you! 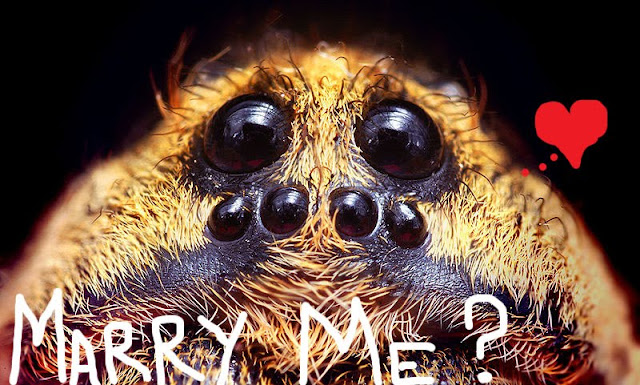